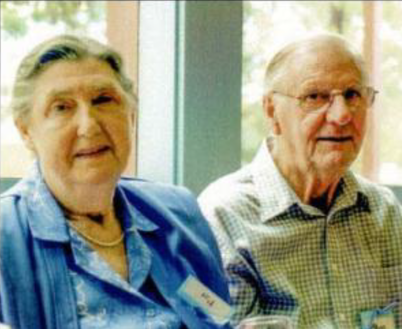 Hans placed a radio microphone on the coffin, alongside other symbols of Ron's life.  The eulogy was read by Ron's son Ian VK5ZIC.  Sadly, Ron's eldest son, Graham VK4GLC, passed away some years ago.

In the congregation was local MP Josh Teague, and former local MP Stan Evans and his wife.

A brief stroll through the adjoining cemetery showed that this area has been rich in Coats and Evans family members for many generations.

Ron started life in the Tramways as an electrical fitter.  During the war, Ron joined the RAFF and because of his technical skills, became a radar mechanic as Australia was deploying a network of secret radar sites around the coast.  Ron's first deployment was to a site near Cape Jervis.  After that, Ron was posted to the northern coastline and islands of New Guinea.  WHile operating as a radar mechanic Ron worked under former AHARS members Phil Williams VK5PN and Ron Holmes VK5VH.

After the war, Ron joined the Commonwealth Lighthouse Service as a Lighthouse Mechanic where he continued for 40 years.  This involved the building, maintaining and deconstructing of lighthouses around South Australia, Northern Territory, Queensland and for a time New Guinea.

Ron had many stories of events along that career that could have ended in disaster as the unforgiving sea was always a present danger.  Notable among Ron's careeer was his involvement in the recovery and restoration of the cannons and ballast that James Cook thres overboard when the HMB Endeavour ran aground near what is now Cooktown.  Ron's skilled work can be seen at the National Museum of Australia, in one of the carriages he built to house the covered cannons.

Another notable activity close to home was the meticulous deconstruction of the lighthouse at South Nepture Island, so that it could be rebuilt in its prominent location on Black Diamond Corner, Port Adelaide. 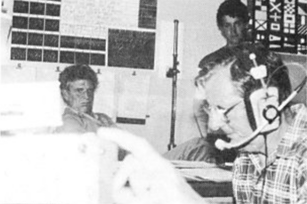 Ron VK5RV on air at the Cape Willoughby lighthouse, 1986. 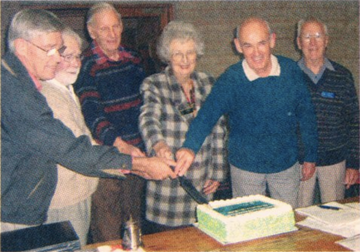 At the AHARS 25th anniversary. Ron is 3rd from the left.