A number of members of AHARS attended the wind-up dinner for the WIA (SA/NT Division) which was held in December 2004.  Two certificates of appreciation were presented by the mew WIA President Michael Owen.  The certificates were presented to two men who have served the amateur community as teachers to those wishing to become amateurs: Frank Holsten VK5LK and Geoff VK5TY.

The AHARS Christmas dinner was held at the Blackwood RSL Club.  During the dinner, the Denis Grieg Award was presented to Bryan VK5SV who had decided to retire as Treasurer after serving in that capacity for almost 20 years. 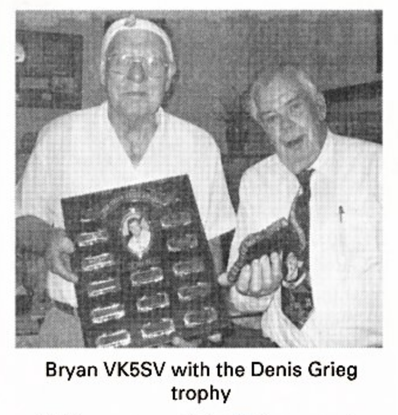 This was held at the Westbourne Park Hall.

The October meeting was a construction night, hosted by Graham VK5ZFZ.  It was the construction of a simple B/C radio.

This was held at the Modbury Heights School.  Speakers included: 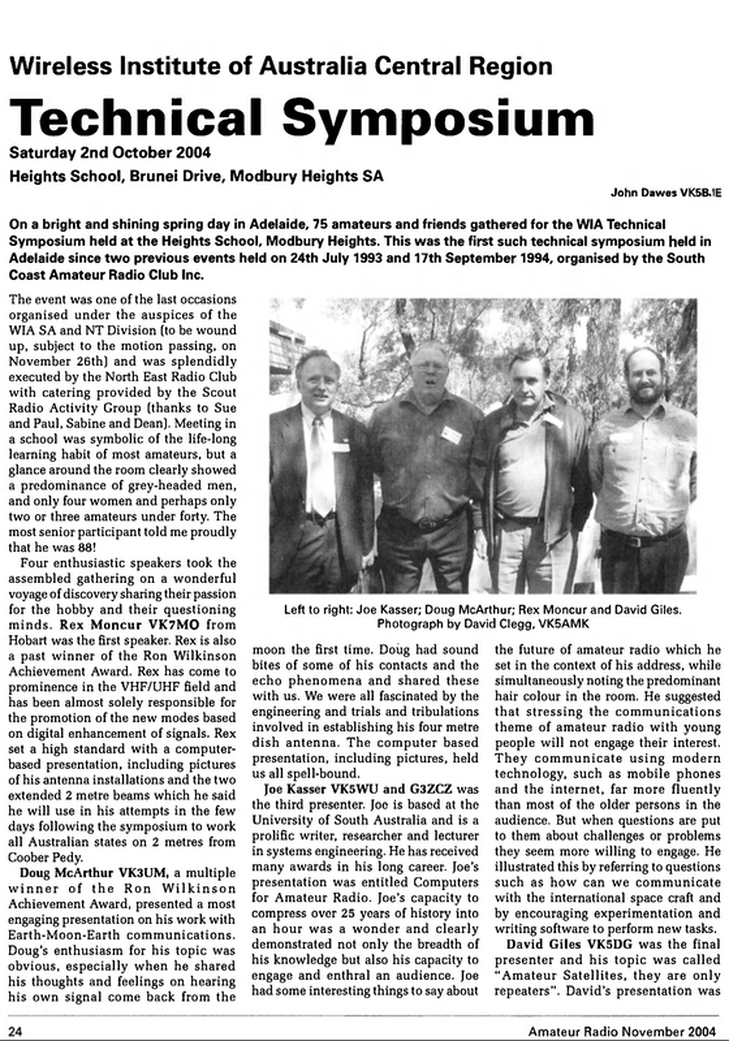 The Editor of AR magazine, Colwyn Low VK5UE, attended the meeting to present Lloyd Butler VK5BR, with a certificate for the Amateur Radio Magazine Technical Award.  Lloyd also received a cheque for $100.00.  This award is presented each year to the author of an article or articles published in AR magazine which is considered to be significant in terms of content and presentation of a technical subject in the field of amateur radio activities. 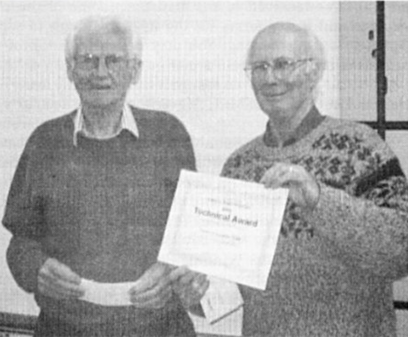 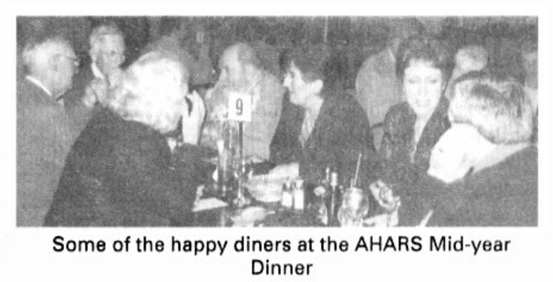 This was held at Tailem Bend.  A total of 16 people attended.

One of the largest groups gathered in May for the regular get together of the Fleurieu Group.  As usual, the luncheon was held at the Goolwa Hotel.  A special guest was Tony VK5ZAI and his XYL. 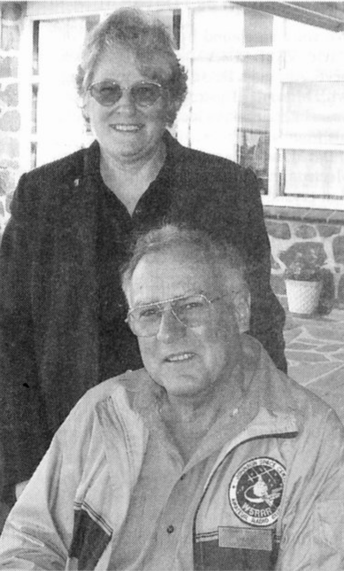 There was an interesting guest at this meeting, Norman M0CRM.  He is the Vice President of RSGB for his area, a local councillor of long standing, and a radio amateur.  He had been contacted by Shirley VK5JSH on Echolink and invited to come to the meeting while he was in Adelaide.

​At the end of the meeting Norman presented the club with a plaque to commemorate the occasion. 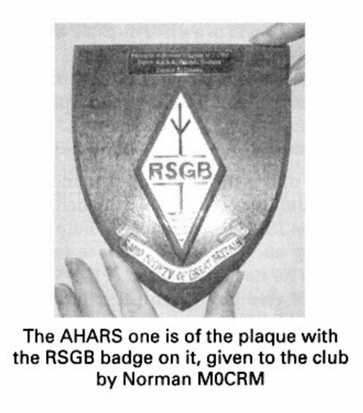 As usual VK5BAR was busy during the John Moyle Memorial Field Day.  This year was the 'year of the LEDS'.  Geoff used several LEDs to light to outside of the building during the night hours.  Later the kitchen was 'invaded by Daleks'.  Three members each with LED headlamp. 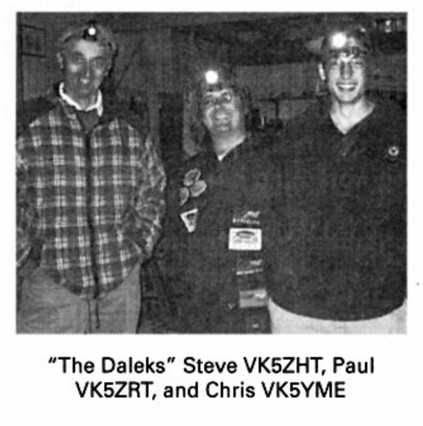 This was a members Buy and Sell night.  As usual it was well attended and some money changed hands as one person's junk became another person's treasure. 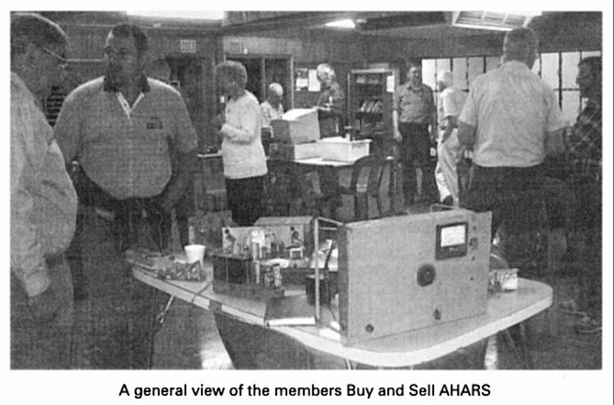 The election of committee members was simple as there were only as many nominations as required and the committee was unchanged.

​This was followed by a presentation on the DXCC Award, by John Elliott VK5EMI.  John illustrated the talk with a powerpoint presentation of some of his QSL cards and stories about the people he had met either on the air or in person through his radio contacts. 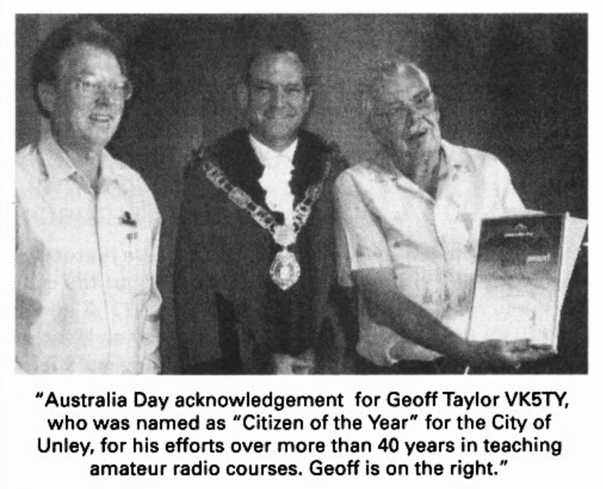 Barbecue at the home of Robin (VK5ATT) & Carol (VK5KEY) De Vore, at Myponga­.