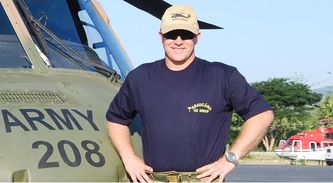 My introduction to radio would be similar to some of the amateurs on the bands today in that I became interested during the great sunspot cycle of the late 70's early 80's (Solar Cycle 21?) with 27 Mhz CB radio. I attempted to learn CW with some tapes but got nowhere and therefore my amateur career never got off the ground back in the 80s.

In 2006 I discovered that CW was no longer a requirement and immediately jumped in and got my Foundation Licence (VK4FCCC).  Thanks to the coaching and encouragement of Gav, VK4ZZ in Townsville, QLD.

Being a serving member we regularly deploy for several months at a time and while deployed in 2008 I took the opportunity to study for the Advanced Licence.  Through the facilitation of Dale, VK4DMC I sat for and passed my exam in Dili,East Timor at the end of my deployment and became the proud owner of VK4GEE.

Shortly thereafter the ACMA made available a list of two letter callsigns, I applied for and received VK4FR. 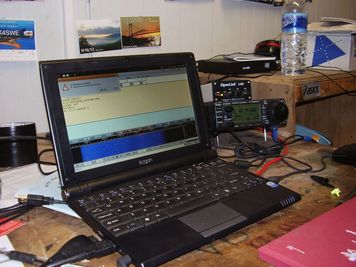 In  2009 I returned again to East Timor and armed with an Advanced Licence applied for an East Timor callsign and for the final four or so months of my deployment I operated as 4W6FR.  Being a newly minted advance call and not knowing to much about DX operations I was not prepared for the experience of being THE DX!  East Timor had been closed for 25 years so demand for 4W6 was high to put it mildly!  I had never managed ever a meagre pileup, added to the fact I was there to work and I was living in shared accommodation made the task fairly daunting. Thankfully several experienced hands offered support while I was there including Bob W9KNI, Bill, VK4FW and Lyn, VK4SWE.  Another ham from PortugaI arrived,Al CT1GPQ, working as a paramedic and using 4W6AL.  He was an experienced DXer and while he worked CW primarily he was a great help with my operating practices. ​

It was because I was sharing a very small space with other shift workers that I discovered the digital modes which allowed me to continue to make contacts without disturbing my fellow (sometimes sleeping) workers. To the best of my knowlege 4W6 had, until that time, never been activated with the digital modes.

Whilst at home in Townsville I enjoyed field operation in support of horse rides and scout activities and this is where I started to pull together my field kit.  I also started to get a home station together with a tower and beam.  I'm also a fan of APRS and my mobile installation gradually grew to APRS, HF, UHF and VHF. 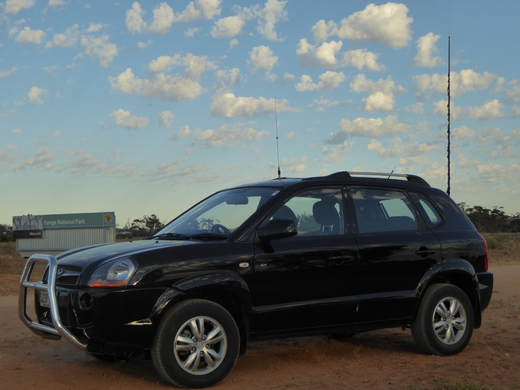 My job requires regular postings and in 2014 I was posted to Adelaide.  Due to my wife's  work and both my sons studying at Townsville university I made the trek down to VK5 on my own. My work here keeps me away for around 3-4 months a year so having a my family here wouldn't have been much better anyway.  I try to get back to Townsville every 6-8 weeks.  Long way from North QLD to VK5 on 40M chasing parks!

My transition to VK5 was made all that easier with the assistance of radio.  A quick google search revealed a bloke (Paul, VK5PAS) giving a demonstration on low weight field operations up in the hills. That sounded like my sort of radio so I headed up the hill to have a listen.  It was there that I met up with Larry, VK5LY (SK), John VK5BJE and of course Paul.  I soaked up the information on offer from these leaders in the field on portable operation, DStar, batteries and APRS.

My home QTH in Townsville is a little over an acre and supports the erection of my previously mentioned tower, a 40/15M vertical and any number of dipoles.  Unfortunately my temporary QTH in Adelaide, while being almost in the city, has a few disadvantages.  An S9 noise floor and a 1 metre by 6 metre courtyard make for a trying time getting on 40M!

The VK5 Parks award has allowed me to get out and explore VK5, experience a zero noise floor and see a number of fantastic places I may not have seen had I just been left to my own devices.  I've explored the parks of Kangaroo Island, the Murray River parks and Lake Eyre. As my posting to VK5 has been extended for a further two years (2017) I hope to continue to get out and about. 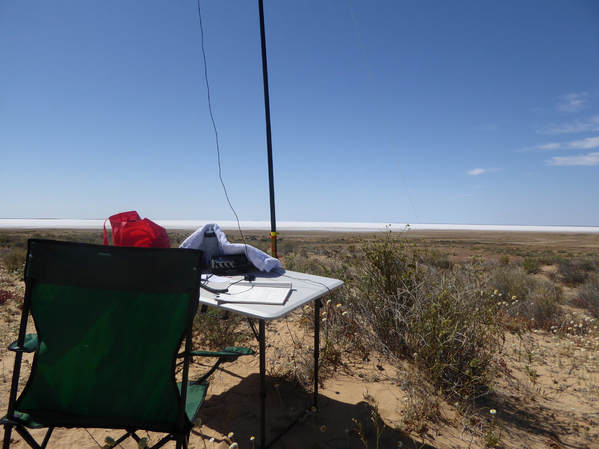 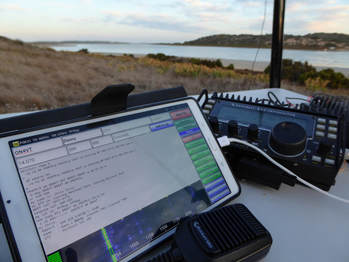 I'm particularly interested in using the digital modes more in the field and have taken steps in that direction running DroidPSK on my phone and tablet.  This aspect is allowing me low power (10W) access into EU on 20 and 40M.  I have also been having a listen to CW again and now with the help of phone apps and the internet I feel I'm making some headway! I hope to activate a park in a Triple Play (SSB,Data and CW) sometime In the near future.


I'd like to thank all those I’ve already mentioned and also those that have answered my calls when I've been in a park and those who have been in a park and persevered with me when I try to operate from my small block in the city.  If you are looking for an online log (LOTW, eQSL, Clublog) I upload as 'VK4FR/P'. If you need or would like a card, mainly the DX operators but local hams welcome too, drop me a line as I'm only to happy to post to your QTH.

I hope to catch you all from a park or in a park someday soon.